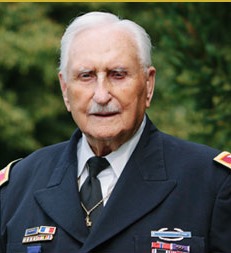 The Annual Community POW/MIA Service of Remembrance will be held on Armed Forces Day, Saturday, May 18, 2013 at 11:00 a.m., at the Letterkenny Chapel, Letterkenny Army Depot, 2171 Carbaugh Avenue, Chambersburg, PA 17201. The service will be followed by special memorial dedications at the adjacent Franklin County Veterans and 9/11 Memorial Park.
The guest speaker will be Colonel Glenn Dowling Frazier, former Prisoner of War and survivor of the World War II Bataan Death March. Born in Ft Deposit, Alabama, he enlisted in the Army at age 16 and was assigned to the Philippine Department under General Douglas MacArthur. In 1942, the Philippine-American forces surrendered. He survived the transfer of prisoners and spent 3 ½ years as a Prisoner of War in Japan in slave labor camps. He is the recipient of the Medal of Freedom, the Bronze Star, four Purple Hearts, and numerous other awards.
Special music for the service will be provided by the Falling Spring Brass Choir directed by David Wenerd, the Community Chorus directed by Marcel Coates, and organist Freda Dorand of First Lutheran Church. The service is jointly sponsored by the United Churches of the Chambersburg Area and the Joint Veterans Council of Chambersburg.

Participants in the service will include Colonel Victor Hagan, Commander, Letterkenny Army Depot, who will present welcoming remarks. Charles M. Nitterhouse Post 1599 Veterans of Foreign Wars will present the colors and lead military honors in front of the Chapel as the service concludes. Post Commander Charles Lucas will present the Code of Conduct and Memorial Recognition of POW/MIA. Cheryl Stearn, President of United Churches of the Chambersburg Area, and area clergy and laypersons will also take part in the service.

In 2007, Colonel Frazier was featured in the 14 hour documentary, The War, directed by Ken Burns. That year he completed his memoir, Hell’s Guest, dedicated to all men and women who fought and died in the Philippine Islands during World War II and in the defense of Bataan and Corregidor, and to all those who worked at home or on the battlefields. He relates how he learned to forgive his Japanese captors after many years of nightmares.
Colonel Frazier will also speak at the Chambersburg Rotary meeting at 12:15 p.m. on Thursday, May 16th and will hold a press conference following the meeting at 1:30 p.m. He will be present on Friday, May 17th at the Chambersburg Heritage Center for a Book Signing of “Hell’s Guest”, sponsored by the Greater Chambersburg Chamber of Commerce.

Opportunities to sponsor memorial flags, trees, benches and pavers at the Franklin County Veterans and 9/11 Memorial Park continue to be available. Brochures are readily available.