The Franklin County Veterans and 9/11 Memorial Park honors all veterans of America’s military history, prisoners of war, servicemen and women missing in action, the casualties of September 11, 2001 as well as the first responders and citizens who saved lives.

Chambersburg is the county seat of Franklin County and is home to a number of county-wide memorials.

Letterkenny Chapel – 2171 Carbaugh Avenue, Chambersburg
In 1945, Italian prisoners of war, housed at Letterkenny Army Depot, built the chapel. It used stone from many of the original farm-houses on the depot site. The chapel features a 65-ft. Florentine belfry, a San Francisco entrance, and a Roman interior.

Franklin County Veterans and 9/11 Memorial Park adjoining 2171 Carbaugh Avenue, Chambersburg
In October 2011, ground broke for the Franklin County Veterans and 9/11 Memorial Park. On May 19, 2012, the county memorial was dedicated by the First Counselor to the Apostolic Nuncio, the Vatican’s Ambassador to the United States, just as was done by the Apostolic Nuncio for the military Chapel in 1945. The United Churches of the Chambers-burg Area developed the memorial park as a place for reflection and remembrance, to memorialize all those who lost their lives on September 11, 2001, and to pay tribute to Franklin County Veterans and First Responders.
Next site: Rocky Spring Presbyterian Church & Graveyard. Follow Carbaugh Avenue to Letterkenny Road and turn left. Continue on Letterkenny Road until just past the intersec-tion of Funk Road. Church is on the right.

FAST FACT: Molly Cochran Corbin, the first woman to receive a military pension and only Revolutionary soldier to be buried at West Point with honors was born in Franklin County. She accompanied her husband to the Revolutionary War, and when he was fatally wounded at the Battle of Fort Washington, she took over firing his cannon. Her birthplace is on Letterkenny Road West, opposite the site of the Cumberland Valley Animal Shelter.

Rocky Spring Presbyterian Church & Graveyard – 1963 Rocky Spring Road, Chambersburg
At the outset of the American Revolution, church pastor Rev. John Craighead delivered an inspirational sermon, and all the adult men in the congregation marched off to join the Revolutionary War. Craighead is buried in the church cemetery as is General Samuel Culbertson, a veteran of the Revolutionary War. 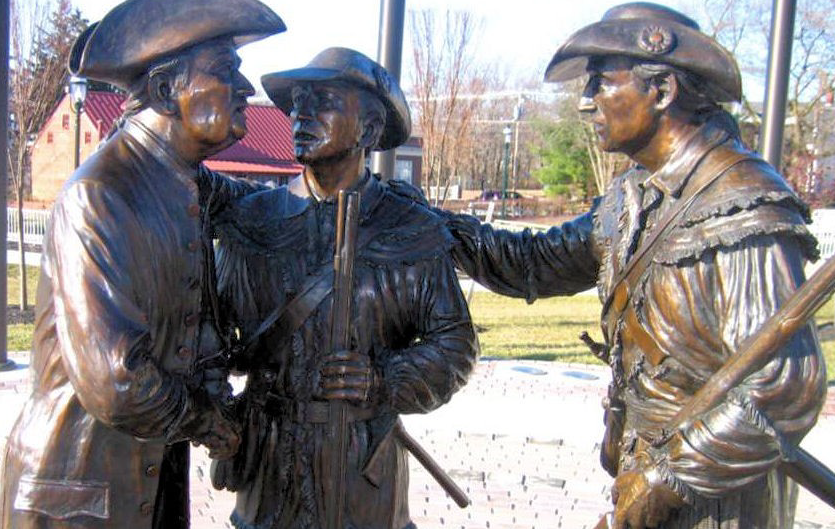 The Homecoming depicts town founder Benjamin Chambers welcoming son James and grandson Benjamin home after the Revolutionary War. The statue is in the center of the Founding Family Park.

Thompson’s Rifle Battalion – In Founding Family Park, off N. Main Street Chambersburg
(Marker is across the foot bridge that spans Falling Spring)
Pennsylvania historic marker identifies the first regiment of Franklin County. It was a unit of sharpshooters that marched to the Siege of Boston and was led by Captain James Chambers.

Chamber’s Fort – Along West King Street, Chambersburg
Franklin County was the colonial frontier of America, and the people on the frontier lived with the impacts of the French & Indian War. Following the defeat of British General Braddock in 1755, the French and their Indian allies struck the Pennsylvania fron-tier. To protect his home and mills, Benja-min Chambers erected a stockade with a lead roof to protect the structure from flaming arrows. The fort was adjoined by water on three sides, aiding its defense and habitability.

Memorial Fountain & Bronze Civil War Soldier – Crossroads of Routes 11 & 30 Chambersburg
Memorial Fountain honors the town’s role in Civil War history. The fountain was erected in 1878 to honor the people of Franklin County that served in the Civil War. Included in the fountain memorial is a bronze soldier, which guards against future invasions. Memorial Square was the site of the meeting between Generals Robert E. Lee and A.P. Hill where they made the decision to move east toward Gettysburg and intercept the Union troops. The Battle of Gettysburg ensued. Today, Memorial Fountain honors veterans of all American conflicts. 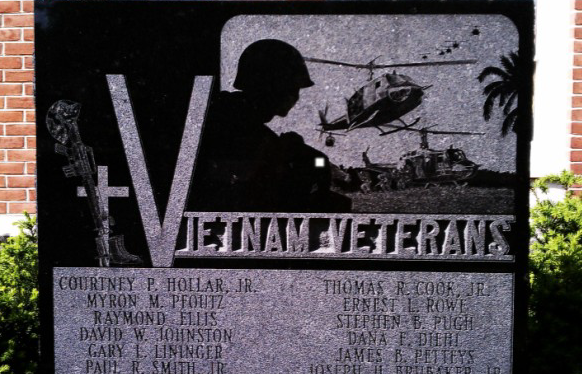 Franklin County Vietnam Veterans Memorial is located on Courthouse Plaza
Facing the courthouse, it is on the north side of the plaza in front of the Commissioner’s Complex.

Chambersburg Doughboy – East Point Memorial; Intersection of East Queen and Lincoln Way East,Chambersburg
The citizens of Franklin County came together on November 12, 1923, during Armistice celebrations to dedicate this Spirit of the American Doughboy, one of the pressed copper sculptures by E.M. Viquesney. The memorial was erected to honor the men and women of Franklin County that served in World War I.

Fort Loudoun & James Smith & The Black Boys – Off Route 30 West on Brooklyn Road, Fort Loudon
Built as a provincial fort in 1756, Fort Loudoun was used as a supply base for the Forbes Campaign. In 1765, the garrison of the fort played a key role in a colonial revolt by James Smith and the Black Boys. This military action centered on trading weapons with the Indians and pre-dated the Revolutionary War by ten years.

Zion Union Cemetery – Bennett Avenue, just off Fairview Avenue, Mercersburg
Eighty-eight African American men served in the United States Colored Troops during the Civil War. Of these, 44 joined the 54th and 55th Massachusetts. At least 38 members of the USCT are buried in Zion Union Cemetery.

Grave of Henry Bonebrake Green Hill Cemetery – 953 South Potomac Street, Waynesboro
Lt. Henry Bonebrake, who was born and lived in Waynesboro, received the Congressional Medal of Honor for valor during the Civil War. He is buried here.

Corporal Rihl Memorial at Fleming Farm – Molly Pitcher Highway/Route 11, Chambersburg
Corporal William Rihl of the 1st N.Y. Cavalry was killed in a skirmish at this site on June 23, 1863. He was the first Union soldier killed on Pennsylvania soil in the Civil War.

Shippensburg Veteran’s Park – Molly Pitcher Highway/route 11, Shippensburg
The park includes memorials to over 5000 Americans from the area that served in WWII and the Korean and Vietnam Wars.